Being an intense sports fan, I found some really great memes on my favorite team.  Most of them revolving around one of our stars.  Oh, Kobe Bryant!  While I love and respect what an amazing basketball player he is, I am keenly aware of how much distaste there is for him among the basketball community.  He is notorious for being a bit of a ball hog and maybe a little bit cocky.  This meme mocks that notion but defends how most Lakers fans feel about his dominance on the court. 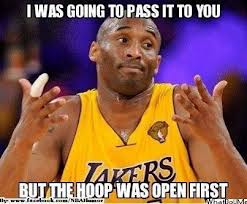 While I am from Southern California and have been a Lakers fan since I was a little girl, a lot of the Lakers fans around the nation are what we call "Bandwagon Fans" which are the fans who just follow the team because they win and have more money to build better teams.  As true Lakers fans, we are often called upon to defend ourselves and our star players and this meme helps us do just that.  All the Lakers Haters out there get on Kobe for not passing but what's the point of having a great shooting guard on our team who just passes the ball instead of making baskets. 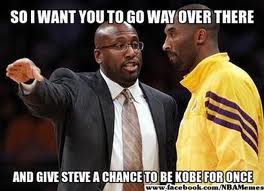 Now this meme, while it again portrays Kobe's passing problem, also requires a bit more knowledge about the team and the things that are happening in the season.  It references game 2 against OKC Thunder during the playoffs earlier this year.  It the nail biting last seconds of the game, it was Steve Blake who they passes the ball to in the last seconds rather than Kobe, and he missed the shot, losing the game.  Coach Mike Brown got a lot of rap after that game for designing the play as such.  Now, while I saw this and laughed, it wouldn't mean so much to someone who didn't watch the game.

Now, fan art was a little bit harder to find, but not impossible.  This first one I found, I actually do not like at all. 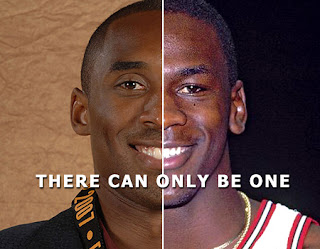 I'm a fan of Michael Jordan too, and I don't think that there can be only one master.  Michael Jordan was a phenomenal basketball player in his time, Kobe is in his on time as well.  This is mainly referencing a play that they both performed that is very similar.  I think that digitally, this wouldn't be that hard to create, but it definitely had to take some time to select some photos that have each player looking in the same direction with the same size smile and all the elements that make it so these interesting right next to each other.  But besides that, there is simple 5 words placed over the top.

This next one seems to require a little bit more technological skill: 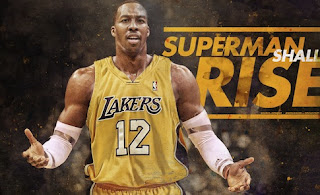 This image portrays our new addition Dwight Howard.  I like the way his arms are held out because it shows how he is being welcomed to our team with open arms.  He has often been referred to as Superman so it is showing how he now fits into the Lakers team and along with our starting line up, will rise and create a great season for the Lakers.